J.L. Bromley Shoe Repair was donated to the Pioneer Florida Museum by Mrs .Pearl Bromley. It was originally located at the corner of Pasco and 8th Streets in Downtown Dade City.
John Lewis (Jack) Bromley came to Dade City from Kansas in 1913. He was a gifted shoemaker. After getting his wife
Minnie and son Fred settled in their home on Fort King Road, he opened his shoe repair business which he operated until poor health closed it's doors in 1930. At that time the shop was moved to the Fred Bromley property on Pasadena Road.

It remained there until acquired by the Museum in the summer of 1990. Many area residents will remember the late Fred Bromley, who operated a watch repair business in Zephyrhills for 42 years. 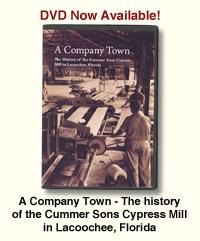